You will need to make sure you install Unity and Sourcetree. If you don't already have Git installed on your machine, the Sourcetree installation should provide the option to do so:

What is Version Control?

In any development project, version control can play a critical role in the development process. It allows a team or individual to track the changes to their project, create save states, revert changes if necessary, or any number of other useful features. When working on a team version control becomes increasingly necessary as multiple people begin making changes to the same set of files. It helps to track who changed what, and when but figuring out why they changed it isnt always as straight forward.

When deciding which version control tool to use with Unity, there are a variety of options to consider. Unity has a couple of options for built in version control: Perforce or PlasticSCM. I have not personally used these options since I have only ever worked with Git as my version control software. So for this article we will be exploring the use of an External version control using Git & Sourcetree (a Git GUI tool).

This is a sample of what an open repository looks like with Sourcetree.

Setting up your Unity project

Before diving into your project there are a few things that will be convenient to setup before getting started. I personally started with an existing project that was not setup properly, and so it took some additional steps to get everything working as expected. 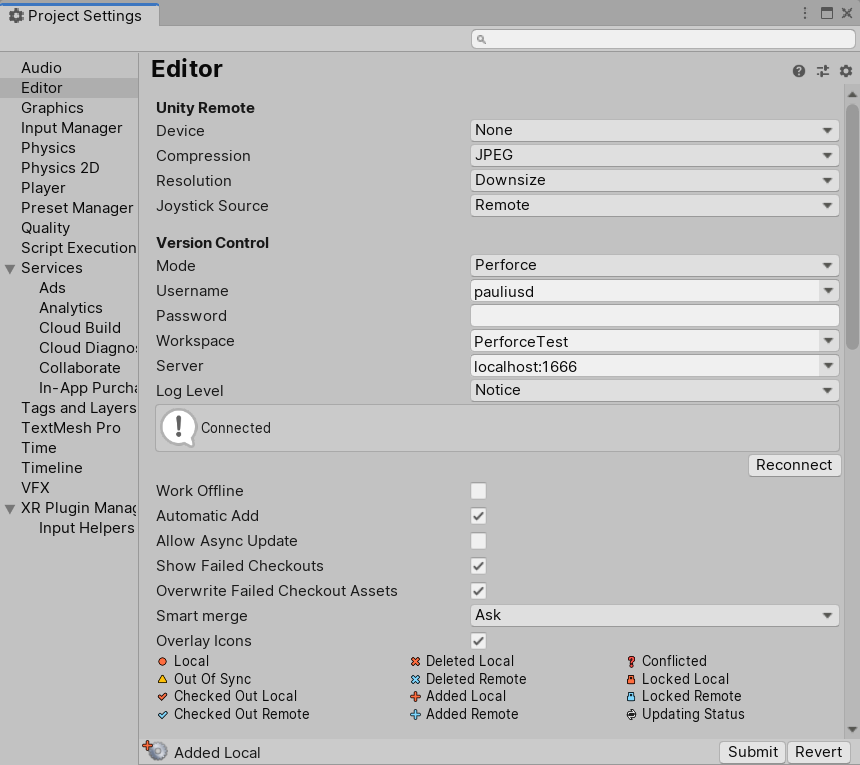 The next setting tells Unity how to save its data, whether as Binary, Text (yaml format) or Mixed. Switching to Text allows these changes to be more easily readible by the human eye, which also helps determine the correct action when handling merges.

This should be set by default

To find out more about the different editor settings see this Unity documentation: https://docs.unity3d.com/Manual/class-EditorManager.html

The final step in setting up your environment for version control is to install Unity's UnityYAMLMerge tool. This tool helps Git & Sourcetree determine how to handle merging complex Unity files in the correct way.

For more information on installing SmartMerge with Sourcetree see this documentation:
https://docs.unity3d.com/Manual/SmartMerge.html

When using a Git repository for your version control you have the ability to add a file called a .gitignore which can define rules for Git on what project files it should 'ignore' and not track. In many projects this means things like temporary files, assets, or packages. A .gitignore file for Unity might look something like this:

A good starting point for a .gitignore in your Unity project is the official .gitignore published by github which can be found here: https://github.com/github/gitignore/blob/master/Unity.gitignore

Hey friends! Have you ever wanted to explore all of the amazing things our world has to offer, but you just never have the time? Well say no more, because that's where I come in!

Since it seemed like I would be stuck on this island for the foreseeable future, I figured I could take some time to commit my thoughts into my memory spell as to not overload my mind. This spell has long been one of my more useful creations, allowing me to...